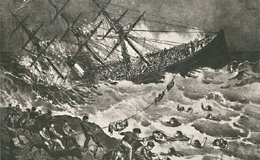 When I wrote my first novel, Ship of Haunts, the focus was on child migration, ghosts and Titanic. Titanic is well-known for being a major maritime disaster. But there have been many other tragedies, also with significant loss of life, and in Ship of Haunts, as well as Carrin, whose ghost haunts Titanic, we meet... END_OF_DOCUMENT_TOKEN_TO_BE_REPLACED

This is a briefer post than normal. I wanted to flag up that Ship of Haunts: the other Titanic story is on sale from Friday 7th February (e-book version) for a week, with prices starting at 99p/$1.63. Get your copy soon! At the same time I thought I’d talk about time and Titanic as the... END_OF_DOCUMENT_TOKEN_TO_BE_REPLACED