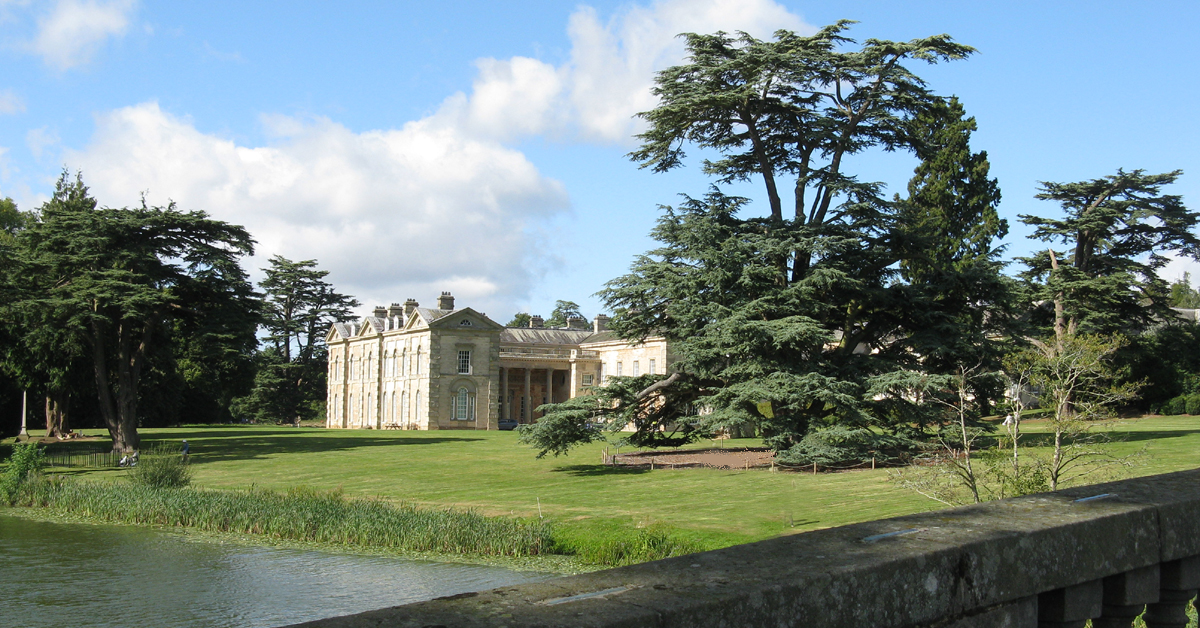 Lately, many of us have been missing our visits to local estates and country houses. So I’d like to invite you on a two-part online historical tour of one of Warkwickshire’s most interesting estates, Compton Verney.

Currently, the Grade I listed property houses an award-winning art gallery opened by Prince Charles in 2004, but apart from this, the estate has a fascinating history.

There has been a manor at Compton Verney since 1150 or earlier. Then, the village was known as Compton Murdak. For a brief time the estate was in the possession of Alice Perrers, Edward III’s mistress, but in 1453 it was sold to the ruthless and ambitious Richard Verney (1435-1490). The Verney family had begun acquiring lands around Compton Murdak in the 1430s, before buying the estate. According to William Dugdale they also built a manor house there around 1442.

The manor and house built by the Verney family became known as Compton Verney around the 1500s.

The first surviving inventory of the house, which dates from the Civil War in 1642, describes a house of thirty rooms, furnished with velvet, tapestry and pictures to a total value of £900 (quite a tidy sum then)  A silk and wool embroidery showing Lucretia’s Banquet may have been one of the original pieces hanging in the Great Hall from this period. According to records, this  was sold to the V&A in 1913.

The house was further extended in the late sixteenth century, following the advantageous marriage of Sir Richard Verney (1563-1630) to Margaret, daughter of Sir Fulke Greville. Richard inherited her family estates and claims to the barony of Willoughby de Broke.

The house was altered further in the 17th century, but in 1711 George Verney (1661-1728), the 12th Baron Willoughby de Broke, decided to rebuild it in the then fashionable classical style, while maintaining much of the layout of the original house. The design has been attributed to the Oxford master-mason John Townesend (1678-1742) and his son William, who’d worked at Blenheim Palace and on many of the new college buildings being built in Oxford. The house was set in formal Barocque-style gardens, but when John Peyto Verney (1738 – 1816), inherited, he called in Scottish architect Robert Adam to rebuild the house once more.

Adam’s changes were more extensive than previously and swept away the courtyard house in favour of a u-shaped design with a grand classical porticoed entrance. Although Adam’s work on the mansion was completed in 1769, building work on the other buildings at Compton Verney continued until the 1780s.

In 1769, Capability Brown was called in to remodel the grounds. He did this by removing the formal gardens, and planting over 2,200 oak trees. He had previously done work at nearby Charlecote Park.

Brown also built the now Grade 1 listed chapel at Compton Verney in 1776, where the family tombs can still be seen. He demolished the medieval chapel beside the lake in 1772 as part of his landscape garden designs, and put up a new chapel in neo-classical style, bringing many of the older family monuments to the new building.

In the nineteenth century, after the death of his elder brother John, Henry Peyto Verney (1773-1852) inherited and became the 16th Baron. He was an eccentric character and became increasingly reclusive. Despite this, he set his sights on Margaret Williams, sister of Mary Elizabeth Lucy who lived at Charlecote (see the image to the left). Mary Elizabeth warned her sister, who she called Miggy:

‘Remember he is old enough to be your father and you cannot be in love with him. It may be all very fine to be Lady Willoughby de Broke but a coronet will not ensure your happiness.’

So, the question is: did Miggy marry him?