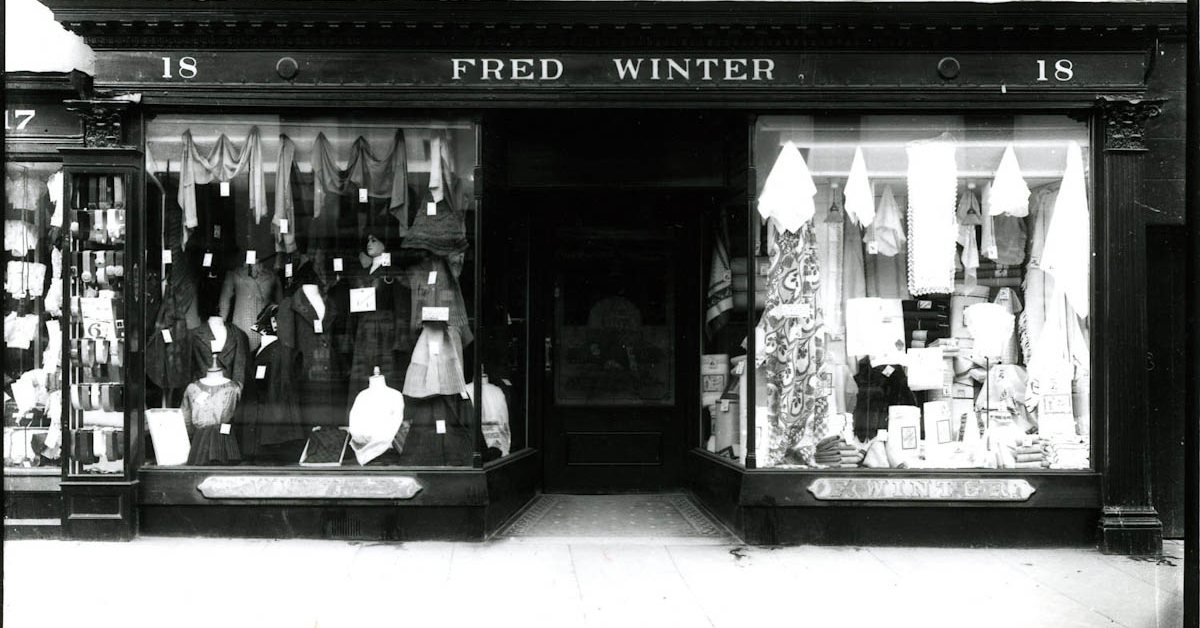 Today I’d like to welcome guest blogger Jann Tracy, author of Marie Corelli: Shakespeare’s Champion back to the site. She is going to tell us about local businessman and entrepreneur, Fred Winter.

In June 1858 Frederick Winter opened his first store in Stratford-upon-Avon, at 17 & 18 High Street. Twenty-three years later, Frederick and his wife Elizabeth lived over the shop, sharing space with their eight children, four shop assistants and two servants. The 1883 listing in Spennell’s Directory for 17 & 18 High Street is for Winter and Lonsdale, drapers and tailors.

The eldest of the three boys, Fred followed his father into the business, learning his trade as a Master Draper. Fred married Edith Casswell by special licence in 1896 and joined with his father in a management role until Frederick’s death in 1897, when he went into partnership with his mother. By the outbreak of the First World War, Fred had the lease on 14, 16, 17 and 18 High Street, and in 1917, with the addition of numbers 30 & 31, dominated both sides of the road.

While building up his business, Fred had several disputes with that thorn in the town council’s side, Marie Corelli, especially over the establishment of the Free Library in Henley Street. In 1916 however, they were collaborating over the uncovering and preservation of the old timbers at 30 High Street.

As well as a successful businessman, Fred was mayor of Stratford-upon-Avon for two years running, in 1913-14 and 1914-15; he was also a JP and Alderman, and in the early 1930s became Master of his local Freemason’s Lodge.

In April 1918 Fred’s mother died of cancer and this time of sadness was increased by the knowledge that Fred and Edith’s eldest son was missing in action.

Frederick Charles, born 1898, and known in the family as Eric, joined up at the beginning of the First World War. His parents subsequently learnt that Eric was alive, though in a German prison camp. During his incarceration the family regularly sent parcels via the Red Cross, but didn’t know if he was receiving them, nor in what state his health was. Happily, Eric returned home and eventually took over the running of the business. Sadly Fred’s nephew, son of his sister May, was killed in action. (Image (DR602/57) courtesy of the Shakespeare Birthplace Trust. Circular letter issued by Fred Winter to customers during WWI, c1916)

Edith died of cancer in 1933, aged just 59 while Fred died in 1941 aged 71. Fred was a popular man, as attested to by many of the letters in the Shakespeare Birthplace Trust Archive, commiserating with him in his sorrows, rejoicing in his happiness and thanking him for his many kindnesses.

More than a century after the young Frederick opened his first shop there’s still a Fred Winter presence in town. I think Fred would have approved the turning of his premises into a hub for the homeless, while, perhaps, regretting its necessity.