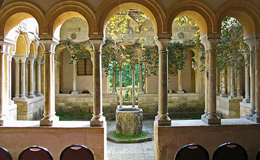 I’m thrilled to be reading at the Hawkesbury Upton Literary Festival,  on World Book Night, 23 April. I’ll be joining romantic novelist Katie Fforde, novelist and poet Orna Ross, author Debbie Young and many other ALLi friends for a night of readings, discussions and fun. And it’s all free!

There will be talks, readings and an exhibition, and a chance to meet speakers and view a display by children’s reading charity Readathon, sharing the benefits of books.

Do come along, if you can. Doors open at 6pm.

And in the meantime, here are some ghostly and mysterious stories, from places not far from Hawkesbury Upton (well, relatively speaking).

Owlpen Manor, near Uley in the Cotswolds

One of the most haunted houses in Gloucestershire, with at least four resident ghosts, guests

have traditionally avoided parts of Owlpen, preferring to stay in ‘safe’ but cramped rooms. One of the ghosts who haunts the building is a little girl, who likes to run up and down the stairs, and was once photographed in the ‘empty’ house.

Some living children, evacuated there during WW2, told the owner, Barbara Bray, they’d seen a ‘visitor; a beautiful lady in a long-sleeved dress and a funny peaked hat with a long veil draped behind her. The woman is thought to be Queen Margaret of Anjou, who reputedly stayed there on her way to the tragic Battle of Tewkesbury (May 1471). In the aftermath of the above battle, Queen Margaret lost both her husband and son, and was exiled to France for the rest of her life. 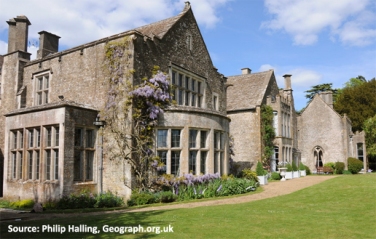 This house was rebuilt in the 16th century, but parts of it date from the early medieval period, when a community of monks was established in the area. A monk has been seen several times since then; at least twice in the chapel: once in 1945 and again more recently when a party of spiritualists explored the house. They made contact with a monk, Brother Charles, who told the group he was happy at Chavenage, presumably true as he’d been there since 1945! Or perhaps even longer…

Chavenage doesn’t have a monopoly on monks. When Elisabeth Cartwright-Hignett first visited Iford in the 1960s, she became aware of a strong smell of incense. The then owner, clearly embarrassed, passed the smell off as one of the plants, but the scent has been noticed frequently since, both inside and out, and often in the garden. There’s a possible connection with Roman Catholicism as, in the 1300s, Iford, or part of it, was owned by a Carthusian monastry, situated less than a mile away. The figure of a monk has been seen several times, including once in the 1970s, by one of Mrs Cartwright-Hignett’s guests. He only told her ten years later that he’d seen the monk at the top of the stairs in Iford Mill; the man was dressed in a white habit and had an expression of great joy. The guest felt the vision was benevolent and associated him with a smell of incense.

For great stories and a night of entertainment, and not a little fun, remember to visit Hawkesbury Upton. It’s free to all.

This article is copyrighted material. Brief extracts including a link to this site can be quoted but the article must not be reproduced in full anywhere without the author’s written permission.