Houses are a current fascination. Perhaps because my next novel includes a house – but is it haunted? Borley Rectory, on the other hand, wasn’t just haunted, but supposedly England’s most haunted house. It  certainly is England’s most complex haunting.

Looking at the picture of the house above, the place has an almost ethereal quality. Borley Rectory was anything but. Built by the Reverend Henry Bull in 1863, the building itself was large, red brick and gothic Victorian. It was decidedly striking – from the outside. Inside, the house was a different story. The floors were stone or heavy wood, the doors were substantial and also heavy, and some of the windows were iron-barred. There was no gas or electric lighting, occupants used oil lamps and candles for light, and the water supply came from a well.

While the house lacked charm, it did have space, being three storeys high with about 20 rooms.  It was on the same site (more or less) as a former building, Herringham Rectory. Herringham Rectory, from what we know, seems to have been rather attractive, but wouldn’t have had sufficient space for the social engagements the Bulls enjoyed, and the size of their family (14 children of whom 12 survived). So Reverend Bull had his own home constructed, and later, even had it extended.

Andrew Clarke, paints an interesting picture, when he talks about the presence of two previous buildings, Herringham Rectory  and an older building, maybe also a rectory, and mentioned in several ancient documents. This building is likely to have been from the 17th century or maybe the mid to late 16th century. Clarke describes it as a ‘typical three-bay oak-framed building.’  He suggests the three buildings would have used the same driveway and also shared a stable and coach house. But why is the oldest building significant? 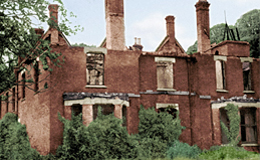 By the 1950s, Borley Rectory had vanished from view, all that remained were cellars, foundations and plenty of rubble. In 1939, the house had caught fire and was badly damaged, it was later demolished (in 1944). But a history of ghosts, suggestions of nuns and messages on walls had finally led to cellar excavations, the first in the thirties when the house was still standing, and later in the fifties, when again nothing of significance was found. But in between, in 1943, was a different story, when ghost hunter Price was one of a team exploring the site. His motley crew included a pathologist, the local vicar and the vicar’s gardener who did the digging. They were looking for death but instead found bottles and broken knives. Then they moved on, and three feet down, and discovered a jawbone and part of a skull.

We can only speculate, from a modern perspective, how the  gardener, Jackson, a former farm labourer insisted the jawbone belonged to a pig, while Bailey, the pathologist instead reported that the bone was human. The vicar, Henning, wanted the remains to be buried in the churchyard, but the locals protested  and the bones were hastily buried at Liston. Oh, for today’s forensic specialists!

The bones and skull raise several questions and not just whether they were animal or human. Also significant: how did they get there, and were they anything to do with the hauntings? Possible explanations include:

An interesting point with regard to the last, is that apparently part of the rectory’s garden was a burial site for plague victims, and occasionally bones would reappear  (A. Clarke, 2003).

Still one question remains unanswered. What did happen at Borley Rectory and how much of the story is attributable to ghosts? Find out in part two.

Note: Borley Rectory no longer exists. Anyone visiting the local area should respect the peace and privacy of residents.

This article is copyrighted material. Brief extracts including a link to this site can be quoted but the article must not be reproduced in full anywhere without the author’s written permission.

One thought on “Borley Rectory: the house and its ghosts – part one”